I found that most of the stories relevant to this blog can be tweeted rather than posted, which is why I am moving all  the new content to my twitter feed at @ninthstreetwatc [no h is not a typo]. The posts on this blog will serve as an archive.You can see the   latest tweets on the right hand side of this page.

Thank you.
Posted by Ninth Street Watch at 8:14 AM 2 comments:

It looks like the City is finally getting to work on a much needed stabilization project to repair and reinforce the culvert that carries Ellerbee Creek under W. Knox Street. For more detailed information, please see the public works page devoted to this project. According to the bid documents, the project will entail soil stabilization by means of high density polyurethane system. The estimated date of construction is mid-September.

The the image detailing the precise location of the project and the work expected to be performed is after the break. 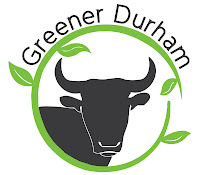 According to the press-release reprinted after the break, there are still some spots left for homeowners to sign-up for the Durham's Energy Savings Program -an EPA funded initiative that provides homeowners with up to $1600 in funds to weatherize their homes for free or at greatly reduced price.

To qualify, your home must be:
• Located in Durham
• 2,300 square feet or less of heated space
• No unvented gas, propane, oil, or wood appliances in the living space
• No major structural, moisture, or hazardous materials issues
• Rental property must have approval from the landlord and tenants
• Occupants must agree to allow access to energy use data for one year prior and two years after the retrofits
• Occupants or landlords must provide the contractor with the $400 payment at the time of the initial home assessment with the Durham Home Energy Savings Program paying up to an additional $1,600 per house
• Occupants must be available to be home when contractors come to do the work (estimated two visits)
• Occupants must remove contents of attics and/or crawlspaces to allow contractor access to those spaces
• Occupants and landlords must be current on all local taxes

There are about 50 slots left,so hurry and sign-up online.

If you are a regular reader my blog (thank you!), you probably know that I am not a big fan of rankings of various sorts because so few of them use metrics that shed light on anything other than the publishers motivation to increase click-through rate on their websites. Every now and then, however, there is a ranking that is both methodologically  rigorous and eye-opening.

The latest ranking compiled by the Martin Prosperity Institute and featured on the Atlantic Cities Blog (required daily reading), is of this rarer variety, using the data from the Bureau of Labor Statics to take a look at metro areas with the largest concentrations of the "creative class," defined as professionals in the fields of science and technology, design and architecture, arts, entertainment and media, and healthcare, law, management and education. 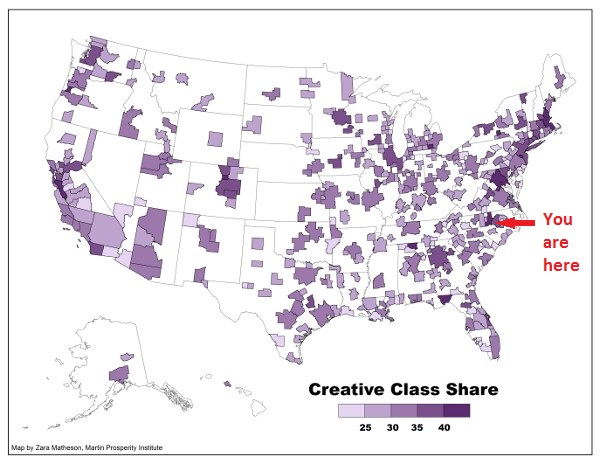 Durham came out on top with 48.4% of its workforce employed as the creative class. This bodes well for our future, as the creative class has been the only meaningful long-term driver of stable middle-class jobs in the U.S. economy in the past decade, and there is little evidence of this trend changing anytime soon. For a much more thorough and in-depth treatment of the creative class and what role it will play in our economic well being, I direct you to the excellent book by Richard Florida, The Rise of the Creative Class.

The full article from the Atlantic is reprinted after the break. 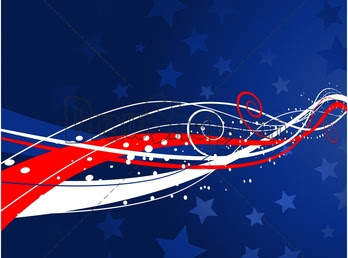 Despite the sweltering heat and unpredictable weather, the city and the neighborhoods adjacent to the Ninth Street Shopping District will be out in force on Wednesday, July 4th to celebrate the annual Independence Day Parade (now in its 63 year!).

Among the highlights: the parade is led by kids and features flags from all  50 states and many countries and lemonade is generously served, compliments of Watts Grocery.


The parade will start at 10:30 a.m. at the intersection of Club Boulevard and Oakland Avenue (see map below) and will last for approximately an hour and a half. The route will take the revelers and the onlookers from the Center of Club toward Oval Park on Alabama and Woodrow streets

To learn more about  the history of this wonderful neighborhood tradition and much more background, read on after the break.
Read more »
Posted by Ninth Street Watch at 5:52 PM No comments:

The Durham Magazine Blog has an interesting article about a two budding entrepreneurs, Katie and Justin Meddis, who have recently moved to the Triangle from California and are looking to start a small organic butchery and sandwich/pastry  shop in Durham. They are calling it "Rose's Meat Market  and Sweet Shop." Between them, the couple has extensive culinary experience and deep appreciation for sustainable agriculture and business practices.
The couple is currently looking at retail space on Ninth Street (the old Magnolia Grill space, anyone?), Watts-Hillandale or Trinity Park. In the meantime, they are doing a series of private dinners where you can check out chops

Posted by Ninth Street Watch at 9:52 AM No comments:

Since the very beginning the relationship between Duke University and Durham has been a complex one, mostly friendly, but sometimes fraught with disagreement and, particularly in the late 80's and early 90's, strained by Durham's rising crime rate. I have often heard long-term residents joke that stone wall ("the Wall") that runs along the perimeter of the East Campus is the physical manifestation of Duke's reluctance to engage with a wider Durham community, and that the University was literally trying to wall itself from the city and regretted not making the wall a bit taller
This new entrance to East Campus was constructed by the Buchanan Boulevard-Main Street intersection. Duke is adding two entrances for pedestrian traffic. Photo by Bryan Roth. 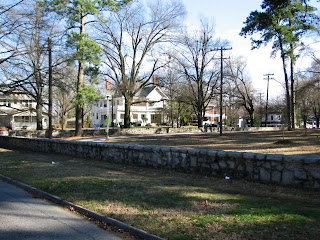 But this was all in the past. Since early 00's, Duke has emerged as the principal force behind the wholesale reinvention of Durham as a vibrant, diverse, and tolerant place to live and work. And nowhere is this relationship obvious than the widespread popularity of the East Campus Walk,  the 1.5 mile gravel pathway circling the Wall, which has become a magnet for joggers, strollers and walkers. Far from walling itself from the community, Duke's wall and the pathway that runs alongside of it, morphed into a public space.

Until relatively recently, however,  the access to the walkway was constrained by the lack of pedestrian access from Broad and Main streets. The University recently changed that when, taking advantage of the Water Main repair work on Main Street, it added two additional entrances  -- the first changes to the wall in over 30 years -- one at the intersection of Main and Broad Streets, and the other on Main and Buchanan Street. In addition to the existing entrance off Broad and Perry Streets, the West side of the East Campus is far better integrated into the Ninth Street  Shopping District.

While this is indisputably a very positive development, Duke and the City have additional work to do before the East Campus can be said to be truly integrated into its surrounding communities. The most obvious and lacking issue is the lack of sidewalks on the outside of the wall across large portions of Board Street, the entire length of W. Markham Avenue. The need to have such a sidewalk is obvious, as evidenced by a clear walking trail created by students and residents, as they navigate mud, grass, roots, stones and other obstacles.Here is to hoping that it will take Duke less than 30 years to recognize this need and build such a sidewalk.

Read the Duke Today article about the new enterances after the break. 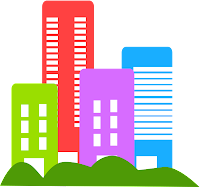 A little over a month ago the City of Durham rolled out a new Proactive Rental Inspection Program (PRIP), designed to "proactively identify and remediate rental housing that does not meet the [code and related ordinances]. This program is the implementation of the March 5 resolution of the City Council enacting the PRIP ordinance. As described more fully in a previous post, this represents a significant change in the way the City investigates and enforces violations of the housing code in rental properties.


The city has designated several "priority zones," including a significant portion of the OWD and Trinity Park neighborhoods (see map below) in which all rental property owners will undergo periodic inspections to ensure compliance with Durham's Minimal Housing Code. Furthermore, landlords whose property registered three or more housing code violations in the past 12-month period will be required to register their property with the Department of Neighborhood Improvement Services (DIS). 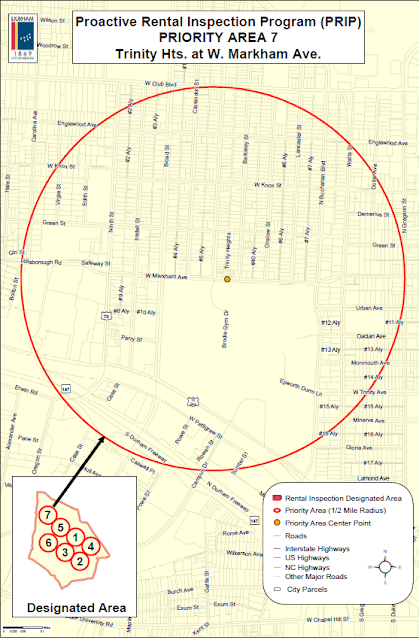 The trigger for proactive (i.e. unprompted) inspections will be something called "Reasonable Cause", defined as (1) a history of 3 or more violations in 12 months; (2) a complain has been received; (3) there is knowledge of unsafe conditions, or (4) violations of the code are visible from the outside of the property. Both single-family and multifamily buildings will be targeted, with penalties as high as $300 a month, and a maximum penalty of $5,000 for failure to register properties found to have more than 3 code enforcement violations.

This program is long overdue, particularly in the neighborhood like ours, where upward of 50% of all properties are rentals. While most neighborhood landlords have been diligent and conscientious in up-keeping their properties, a few bad apples have cropped up here and there.

Although this program is a great start, several areas for improvement immediately jump to mind:

Still, this a step in the right direction, and I hope with time, the program will be revised and strengthened to improve the overall appearance and safety of our neighborhood. The full scope of the program is described in greater detail after the break.

Harris Teeter construction to start late summer; lots of other development to follow 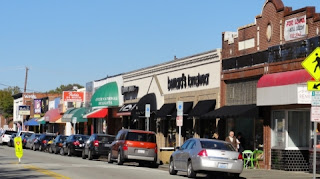 The yesterday's Herald Sun has a good summary of all of the new development coming to Ninth Street, from the new Harris Teeter (which has undergone significant design changes in response to the neighborhood concerns) to renovating the space formerly occupied by George's Garage, and the shops along the west side of Ninth Street, including "Duck Shop" and 701 Ninth Street.

Much of this has been covered by this bog previously, but one significant piece of news is that the developers have secured all of the financing and now seem primed to begin renovations in late summer/early fall.


For a look at the proposed designs, see my previous posts above. The full article is reprinted after the break.

Durham Homes Sales Up in May 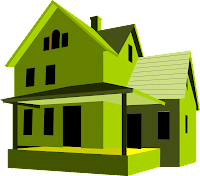 The Triangle Multiple Listing Service (TMLS) reports that the Durham Home Sales were up 38% this month compared to the same time last year. As can be seen on the chart below, this continues a positive trend that began in January and continues to accelerate. The Durham market performed better than the region as a whole (up 26%). The median sales price of a home increased by $2,250 from a year ago to $177,250 with the average price of a home at $197,639 (3.5% increase). The days on the market have gone down by 9 from 120 to 111. Finally, in another crucial detail, the months supply of inventory is sharply down from 11.2 months in 2011 to 7.2 months now, a decrease of 35.8%.

The full breakdown is  embedded after the break 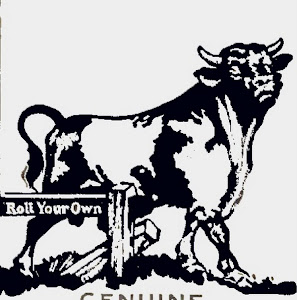